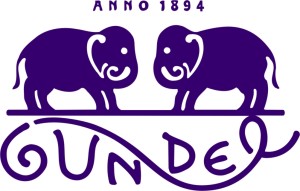 If anybody ever asks which is the most famous Hungarian restaurant, I believe most of us would say: the Gundel. Not only one, but several members of the Gundel family represented the greatness of the Hungarian cuisine in the last 180 years. Although,  currently no family member is in the gastronomy business, but the name “Gundel” means fine dining, cookbooks, schools and the famous Gundel pancake for all of us.

Johann Gundel (Gundel János) was born in Germany, and after his parents died early, he came to Hungary at the age of 13. Gartner György. His stepfather’s brother-in-law, helped him to learn and work in restaurants and parlors, where he learned so quickly that at the age of 25 he bough his own restaurant, the Bécsi Sörház (Viennese Beer House), in Király steet. In 1879 he bought the Virágbokor restaurant, and the Erzsébet királyné Hotel. Between 1889 and 1904 he rented the István Főherczeg Hotel. There was a room in this hotel that was dedicated to Mikszáth Kálmán, a Hungarian writer, editor, member of parliament, who was known for his famous appetite, he influenced the creation of the famous “Palócleves” by Gundel János. The soup is made of mutton, potatoes and green beans, and thickened with sour cream and flour (habarás), and spiced with dill and a bit of vinegar.

Gundel János became the President of the Hungarian Hotelier and Restaurateur Guild, and also received the Knight’s Cross from Franz Josep, the Emperor, in 1885. Among his five children, his third son, Károly,  showed the most interest in gastronomy, actually so much, that in a short time he was mentioned as an expert in his field, just like Escoffier or Voisin, other great chefs of the era.

He started his career in his father’s Főherczeg Hotel, as a runner, responsible for the daily shopping from the markets. His friendship with Marchal József led him to the Tátra mountains, where he became the secretary of the Palace Hotel. When he met Marchal József’s sister-in-law, Blasutig Margit, was love at first sight. The couple had 13 children along the years. The couple moved to Budapest in 1910, where, Gundel Károly started renting the Wampetics restaurant, which is the “Gundel” restaurant today.

After WWI, Gundel rented out the Royal Hotel’s restaurants, but as the rental fee was too high, he changed to the Gellért Hotel’s restaurants. And this is the point where his hard work blossomed: the restaurants became the best restaurants in Budapest, where more than 1500 people could be seated. He could be only seen in his restaurants during these years, as a hard working man. He started his days in the food markets, choosing the perfect meat, fish, salads, vegetables for his restaurants. He had his own garden, where he grow all the vegetables and fruits, even had his own pig farm, to breed and process his favorite meat products. A cellar in the Gundel restaurant and one in Budafok preserved the best wines. Several creations were named after him: one particularly popular specialty is the Gundel-tokány (Gundel stew). A very rich stew made of loin, fois gras, green beans, asparagus, potatoes, mushroom, onion, parsley, red wine, and cream.

In the 1930’s he wrote several books and cookbooks, especially to the gastronomy industry, but several articles were meant to help the housewives at home. His books were a real helping guide in the Hungarian gastronomy, as before him, not too many books helped the Hungarians to keep the traditional recipes, our culinary history got a helping hand from Gundel Károly.