The main characteristic of the traditional Hungarian kitchen is paprika, without any doubt. Harvest time of this red “gold” plant (as called in Hungary) starts after September 8 (day of the misses). In October, farmers harvest for the second or even the third time from the same plants. The first ripe paprika fruits are at the bottom of the plant, and the upper ones  ripen later.

Although paprika can be grown anywhere in Hungary, there are two main paprika growing regions in the country: Szeged and Kalocsa. 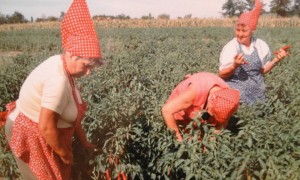 Franciscan monks are said to be the first people who brought paprika to Szeged from their wandering around the Balkan region. They soaked the paprika in pálinka and used it to heal insect bites or malaria. (http://www.latogatobarat.hu/en). Due to the healing fact and the lack of pepper in the country during the Napoleon wars, (he banned bringing any spices from the Middle East), paprika became more and more popular in the region. 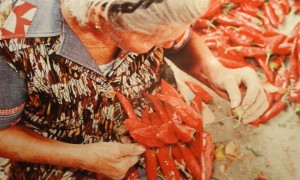 Mainly spicy paprika was used in kitchens until the 1940’s. Before this time a special way of removing the seeds and ovario could provide sweet or mild paprika, but the sweet paprika plant itself was produced only after the 1940’s.

Paprika harvest is a work that requires lots of human labor. There are many different paprika types that are present in Hungary, and they have different tastes, textures, smell, color, and are harvested differently. Near Szeged, farmers prefer the flagging paprika types, which require hard manual work. Whilst in the Kalocsa region, the flower-shaped paprika fruit is commonly harvested by a combine harvester. After the harvest, paprika is left for a 2-3-week rest before it is dried and ground in the mills. During this resting time, all the nice colors of the fruit come out.

Back in the old times farmers would sallow the paprika and hung them on the house walls and roofs.

The ovario of the plant was removed, and they were carefully selected before grinding. Nowadays the whole plant is ground, because there is no time, nor enough people, to effectuate this procedure, except when families make their own paprika powder. Seeds are also ground in the paprika powder, and the oil in the seeds is absolutely necessary to achieve the fine texture.

Unfortunately, the average paprika farmer age is getting close to 70 years, and paprika growing is not popular among young farmers. The “golden age” of paprika was in the 1970′-s, when approximately 10,000 hectares were used only for paprika growing. That area today is around 1,000 hectares. As less and less paprika is grown in Hungary, more Chinese products are imported. All packaging should mention the region and country where it is from.

– Oil or lard is absolutely needed to cook with paprika, as it brings out the nice color of the plant during cooking,

– While roasting spices brings out more flavor from them, be careful with paprika as it burns easily.

– Get your paprika supply at autumn- winter time of the year, and purchase enough until the next harvest time.

– Check the date of expiration, -the longer, the better.

– Hungarian paprika is of a very fine quality, so I suggest you to stick with that.

– Keep the paprika powder in a cool and dark place.

Thank you very much to Anita Molnár for the excellent guiding, and providing me all the interesting information. Please visit Paprika Molnár Röszke for more information.

One thought on “Paprika Harvest”