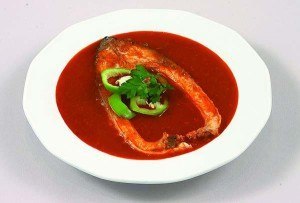 Starting your day with sweet white flour bakery products, having heavy soups with meat, (and meat again as main dish), and of course a delicious cake as dessert, the everyday Hungarian cuisine is considered very tasty, albeit is not considered healthy. The main ingredients of our typical dishes are: onion, lard and paprika. They are not unhealthy in little amounts, but cooking everything with lard can cause health problems, like high blood pressure, cardiovascular problems, obesity etc. Whereas paprika, does not do any harm to you. It is a long time discovered medicine against stomach ache, helping digestion, and it contains high quantity of vitamin A and C.

Visiting any markets halls of Budapest (Central Market hall, Hold utca, or Lehel piac), you will be amazed by the amount of meat sold over the counters. 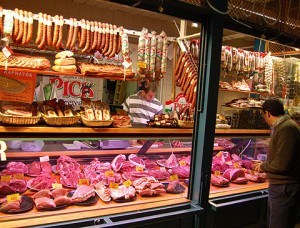 That is why I would like to call your attention to the meat-free dishes, which are not so well-known among foreigners, but have a special way of preparation in Hungary, and are highly recommended.

Fish is consumed in small quantities in Hungary and mainly around the christmas season. Rácponty is made of carp, lavishly garnished with potatoes, onion, tomatoes and bell pepper, and covered with sour creamy sauce. The best restaurants are competing on how to make proper fish soup in Szeged or Baja. Carp is a main ingredient, but any other freshwater fish can be used for fish soups.

Főzelék is one of the most amazing things included in the Hungarian culinary experience. As the word “főzelék” is untranslatable, it is usually referred to as a “vegetable dish”. Originating from the 16th century, our ancestors were eating vegetables cooked in a little liquid, and later it was thickened with various thickening methods. The most common thickening methods are: “rántás” and “habarás”, both with using all purpose flour. A healthier and new popular way of preparing “főzelék” is to thicken it with a vegetable puree. Főzelék is often eaten with meat, eggs, or other vegetables. A great concoction made of pumpkin with dill, pea or green beans. For example, you can taste delicious főzelék for example at Kádár étkezde, Frici Papa – having a different variation every day according to the season.

Fresh salads are available in most of the restaurants nowadays, the cucumber salad is one of the most popular side salads with “pörkölt” or “paprikás”. Easy to prepare, the thin sliced cucumber is mixed with sugar, salt, 1-2 spoons of vinegar and chopped garlic, then allowed sit for an hour. It is then often topped with sour cream. 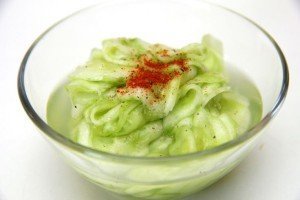 Although the Hungarian kitchen’s main ingredients are lard/onion/paprika, the lard is often substituted with vegetable oil, goose-fat, or duck-fat. The chemistry composition of goose-fat and duck-fat is similar to olive oil (richer in monounsaturated fatty acids), and this quality makes them healthier, has a positive affect on the heart and circulatory system. Consuming these fats are recommended.

Milk products are also very popular in Hungary. Altough the effect of cow milk on health is questionable lately by scientists, but it is still a major source of calcium in our culture. You can find a great variety of savory and sweet products in supermarkets and restaurants also. Not to mention the choices in cafés and confectionary shops. Cottage cheese is a popular ingredient of many cakes, like curd cheese filling strudel (túrós rétes), Rákóczi túrós, and cottage cheese cake with fruit topping. “Körözött” is a savory version of cottage cheese, with sour cream, paprika, cumin, salt, mustard and onion mixed together.

Fancy to try some healthy Hungarian food in the company of your personal guide?

Join us on our culinary tour