The Compromise of 1867 with Austria provided new hope to Budapest economically, and after the unification of Buda, Pest and Óbuda  (1873), the city developed a capitalist infrastructure and,- the population greew rapidly,-  Pest became a place of great municipal construction and a cultural output that rivalled that of Vienna. This spirit of energy and independence was evident during the millennial celebrations of 1896: City Park, Heros’ Square, the first underground railway line, Matthias Church and the Museum of Applied Arts were also born of this productive moment. This productivity continued until the Second World War. 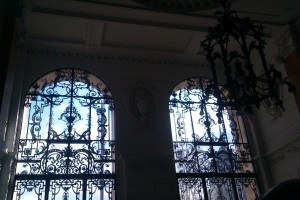 Many of the residential buildings and institutions ,- that create Budapest’s landscape today,- were built in this era.

Budapest 100, is a unique program that draws your attention to the buildings that surround us. The event is organized once every year, but you can follow up the 100- year old buildings on their map since 2011.

Take a look into the residential buildings’ inner courtyards, and secret gardens as well, if you have a chance.

Walking in the streets of Buda and Pest is exciting and always surprising. Open your senses and feel the unique and classical atmosphere of the city!

See some of these beauties on our culinary walking tour.